Library service for suburban Ramsey County can be traced back to the 1920s when the extension division of the Saint Paul Public Library provided books for various public schools. A bookmobile visited the suburbs in the early years as well. The villages of White Bear Lake and North Saint Paul had their own libraries during this period. 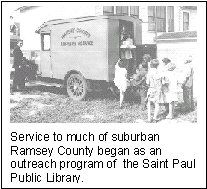 In 1939 Ruth Palmer became the "County Librarian," reporting to Perrie Jones, the head of the Saint Paul Public Library. The Ramsey County Public Library was officially established in 1951 when the Board of Ramsey County Commissioners appointed the first Library Board. Service was provided through a bookmobile and several small outlets.

As growth in Roseville and the surrounding suburbs mushroomed, a new headquarters library was built on the corner of County Road B and Hamline in 1964. Full-service libraries were built in Maplewood in 1967 and Arden Hills in 1969. The village library in White Bear Lake merged with the County in 1967 followed by North Saint Paul in 1972. New libraries were built in those communities in 1974 and 1977 respectively.

Ruth Palmer retired as director at the end of 1969 having served thirty years. As of January 1, 1970, the staff consisted of 32 full-time and 35 part-time employees. Phyllis Olmen was acting director until Nowell Leitzke started in the fall of 1970, and Norman Vinnes succeeded him in 1971.

The borrowing of books and other library materials increased by 129 percent during the 1970s, reaching a total of 1,302,414 in 1979. The Friends of the Suburban Ramsey County Libraries were formed in 1979 to advocate for better library funding. The Friends, with nearly 400 members, focused much of their energy on holding an annual used book sale.  Money they raise is donated to the Library. 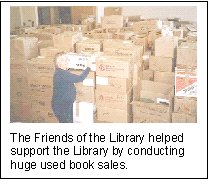 The Roseville Library was remodeled in 1981 to accommodate increased use. In 1986, the library's first computer system was brought online to handle lending transactions and catalog records. 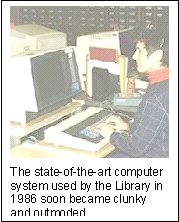 Because of growing communities and increasing use, the Library Board developed a plan for expanded and new facilities. The result was a $15,000,000 bonding program for a new library in Mounds View in 1990 and Shoreview in 1992. The bonds also financed the rebuilding of the Maplewood and Roseville libraries in 1993. 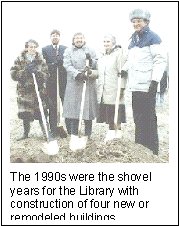 When Norm Vinnes retired in 1993, he was succeeded by Marianne Roos, who served as Library Director until 1999. During Roos's tenure the library saw substantial increases to the book budget and additional open hours, including Sunday hours. Roos launched the Dunn Bros. Coffee Shop at the library in Roseville, the first such library venture in the state. When Roos left in 1999, Alice-Jo Carlson served as interim director and was appointed director in September 2000. Carlson instituted alternative revenue projects, such as the Booker Literacy Project and Licensing Program, a line of merchandise, and partnerships with cities within the Library's service area.

When state and county budgets were reduced in 2003, Ramsey County Library suspended service at the library in North Saint Paul to meet budget targets. Alice-Jo Carlson retired in January of 2005, and Susan Nemitz was appointed director.

In March of 2005, a library was opened in the North St. Paul Community Center. County, City and Library officials partnered to develop an innovative plan for library service at this location. Other branches in the Ramsey County Library system included Arden Hills, Maplewood, Mounds View, Roseville, Shoreview and White Bear Lake.

To meet increasing levels of business, the Library adopted a facilities plan in 2003. As Phase 1 of the plan, the library on Beam Avenue in Maplewood was sold, and in March 2007 a new 31,000 square foot library was opened on a site across from the Maplewood Mall and adjacent to a city park. Phase 2 of the plan called for the expansion of the library in Roseville. The property immediately north of the library in Roseville was purchased to provide additional parking, and a remodeled and expanded 2-story facility is on the site. The new library, which is LEED gold certified, opened in June 2010.

Because Ramsey County Library’s budget could not support the high cost of operating the aging Arden Hills facility, the building was closed at the end of 2010.  In accordance with Master Plan recommendations, the Library looked for a partner to help support operations in a re-located library.  By partnering with the New Brighton Community Center the Library was able to reduce annual operating costs by $150,000.  The 6,250 square foot space within the Community Center provides a warm, welcoming library with 21st century collections, services and public computing.

Following the Library Facilities Master Plan, the library in White Bear Lake was renovated in April 2015 to expand space and amenities and incorporate flexibility to support future needs. This library is a State of Minnesota Sustainable Building 2030 (SB 2030) energy standards building with study and lounge spaces, as well as the new stone fireplace that is the focus of a comfy reading area.

In 2016, Nemitz left the Library, and Jill Boldenow was appointed director.

The library system is governed by a seven-member Library Board appointed by Ramsey County Board of Commissioners. The Library's annual budget in 2017 was $11.7 million, with the majority of funding coming from suburban Ramsey County property tax revenue.

More than 1.5 million people visited the Library in 2017, and circulation reached almost 3.7 million. Customers are also making millions of remote electronic connections to the library catalog, website and databases.