Ramsey County Library (RCL) has collaborated with local schools to issue more than 8,000 library cards to students through the ConnectED Library Card Challenge. 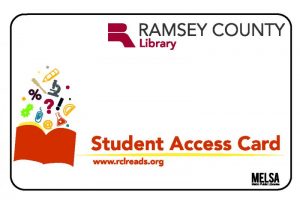 The Library Card Challenge, launched in fall of 2015, is a national framework to help communities strengthen partnerships between schools and public libraries, ensuring every child has an opportunity to receive a library card.

RCL began the challenge partnering with the White Bear Lake Area Schools. It quickly became apparent that students would benefit from a single library card that could provide access to both the public library and the school’s media center. A dual use Student Access Card was piloted at the two middle schools and immediately proved valuable.

"By partnering with our area school districts, we have connected thousands of students to valuable learning resources in the public and school libraries," says Library Director Jill Boldenow. “Meeting the Library Card Challenge is a win-win for everyone.”

The use of RCL Student Access Cards expanded in late 2016 to include all high school students at White Bear Lake Area Schools. In 2017, Roseville area middle and high schools joined the challenge and work has recently begun to distribute cards in the Mounds View school district.